The ravings of Lucifer as the authoritarians close in

I just want to be clear, in less than the span of one year, we went from being able to speculate, question, express doubt, state opinion, and otherwise have free and open communication about what we believe and think about our world to an Orwellian 1984 prequel.

In the last 6-8 months, you have seen the rise of:

- Censorship of information that does not fit one narrative.

- Blatant Favoritism of one narrative over any other in all forms of media, ALL of them.

- We see places with draconian lockdowns that do more to kill economies than they do to stop a virus with a high 90's (usually over 99%) survival rate.

- We see total anarchy and chaos in the streets.

- We see establishmentarians talking about putting opposition leaders and some of their supporters on "lists."

- We see an almost complete manifestation of every dystopian 1984 conspiracy theory ever told...

And the people who see this and speak out about it are being called nazis, racists, misogynists, fascists, and crazy.  They are being silenced, fact-checked, and humiliated. Their Ancestral heroes are being emasculated, defeated, and flipped into villains.

I see these people doing this to them sanctimoniously talking about unity and justice and peace and inclusiveness and diversity... but all I see are wind up activists and sleeping zombies.

Opposing them I see hordes of people complaining about it, making hours and hours of video documenting and analyzing it, and they seem endlessly shocked... Shaken, but never stirred to action or outspokenness. When one of us is called a dehumanizing slur, we need to start backing each other up, we need to start acting like we have more fortitude.

You need to stop listening to them, you need to stop caring what your authoritarian friends are saying about you. They have gotten you convinced that standing up for yourself and your rights and beliefs are fascist or racist, or childish.

They have you backed into a cowards corner, like someone who has been abused enough to not look their abuser in the eye and say yes Ma'am and Yes Sir!

No more. I do not CONSENT to this, block me, shun me, delete me, rob me, beat me, deplatform me, or kill me, but I do not consent. I am not a villain, I am not a racist, nor a nazi, I am not even a fucking conservative, and there is nothing wrong with that anyway!

Do not let your friends scare you anymore. Be outspoken, be proud, and say NO! I do not consent!

No matter what happens with elections or civil wars or anything else, you (YOU!) need to stand up and say no.

The following is selected from Paradise lost after Lucifer/Satan is cast from heaven and speaking to his armies, and in the last lines, he persuades Eve to eat of the apple... I can think of no more fitting scene than this to match what is happening:

All is not lost; the unconquerable will, And study of revenge, immortal hate, And courage never to submit or yield; (And what is else not to be overcome?) That glory never shall his wrath or might Extort from me, to bow and sue for grace With suppliant knee and deify his power, Who from the terror of his arm so late Doubted his empire.
Fallen Cherub, to be weak is miserable, Doing or suffering: but of this be sure, To do augh good never will be our task; But ever to do ill our sole delight: As being contrary to his high will Whom we resist.

To visit oft this new creation round; Unspeakable desire to see, and know All these his wondrous works, but chiefly man, His chief delight and favour; him, for whom All these works so wondrous he ordain’d, Hath brought me from the choirs of cherubim Alone thus wand’ring.

O sun, to tell thee how I hate thy beams, That bring to my remembrance from what state I fell; how glorious once above thy sphere; Till pride and worse ambition threw me down, Warring in heaven against heaven’s matchless King.

What could be less than to afford him praise, The easiest recompense, and pay him thanks, How due; yet all his good prov’d ill in me, And wrought but malice; lifted up so high I ‘sdain’d subjection, and thought one step higher Would set me highest, and in a moment quit The debt immense of endless gratitude, So burdensome still paying, still to owe; Forgetful what from him I still receiv’d, And understood not that a grateful mind By owing owes not, but still pays, at once Indebted and discharg’d.

Which way I fly is hell; myself am hell; And in the lowest deep a lower deep, Still threat’ning to devour me, opens wide, To which the hell I suffer seems a heaven.

O then at least relent: is there no place Left for repentance, none for pardon left? None left but by submission; and that word Disdain forbids me, and my dread of shame Among the spirits beneath, whom I seduc’d With other promises and other vaunts Than to submit, boasting I could subdue Th’ Omnipotent. Ay me, they little know How dearly I abide that boast so vain Under what torments I inwardly groan, While they adore me on the throne of hell.

So farewell hope, and with hope farewell fear, Farewell remorse: all good to me is lost; Evil, be thou my good.

If what is evil Be real, why not known, since easier shunn’d? God, therefore cannot hurt ye and be just; No just, not God; not fear’d then, nor obey’d: Your fear itself of death removes the fear.

Why then was this forbid? Why but to awe; Why but to keep you low and ignorant, His worshippers; he knows that in the day Ye eat thereof, your eyes that seem so clear, Yet are but dim, shall perfectly be then Open’d and clear’d, and ye shall be as gods.

BACK TO CONTENTS PAGE
BACK TO SITE MAP 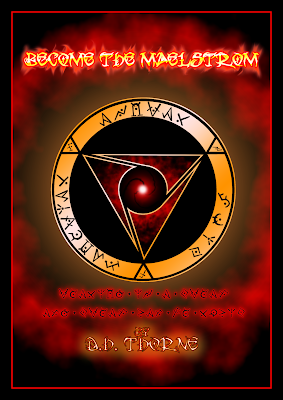 BOOKS FOR SALE by D.H. THORNE